The Most Famous Weddings in American History

The Most Famous Weddings in American History

Everyone loves watching and admiring an extravagant wedding. Every wedding is special but famous weddings are a clear public declaration of love that millions of people worldwide will see, I couldn’t think of a better way for your partner to know you love them. If you’re like me then as much as you admire a famous wedding, you’re also extremely jealous. Celebrities and high-profile individuals don’t have the stresses of planning a wedding most people would, they don’t have to worry about what’s the best time to send wedding invitations, will the cake turn up in good condition on the day, or if it will be too expensive to invite all the desired guest list as they’ll have someone planning their perfect day for them. Weddings are extremely popular, there are 2.5 million weddings a year in the United States alone, but we’re here to talk about some of the most famous weddings in all of American history.

Kim Kardashian is a well-known American influencer with her own business and features in the TV show Keeping up With the Kardashians. Kanye West is a famous American rapper, record producer, and fashion designer, he is so patriotic he has even tried to run for President of the United States. Both being so famous this was a wedding everyone was waiting to see. They were married in 2014 in Florence, Italy, and the ceremony was as beautiful as everyone was hoping it would be. They had around 200 guests and the bride rocked a stunning lace Givenchy dress. Many famous names attended this wedding, including the popular singer Lana Del Rey who also performed for the newly-weds and their guests. This wedding was so popular among fans that their wedding photo is still one of the most liked photos on Instagram at 2.4 million likes.

Jennifer Aniston is a well known and loved actress, her most well-known role being Rachel in the tv series Friends that ran for 10 seasons and attracted a massive 52 million viewers since it was released in 1994. Brad Pitt is also a highly loved actor and film producer, starring in many popular films such as Fight Club, Once Upon a Time in Hollywood, and Inglorious Bastards. They were married in 2000 and although this marriage sadly ended 7 years later the wedding was still one of the most famous in American history. They were married in Los Angeles in July with around 200 guests. The wedding cost the pair 1 million dollars! Security had to be really tight due to how famous they both are and cost $76,000 on the day alone, guests also had to sign a confidentiality agreement and the County Sheriff had to help with traffic control, they wanted to ensure their day went as smoothly as possible.

Jennifer looked stunning in a floor-length, low back lace dress by the Italian designer – Lawrence Steele, matched with her Manolo Blahnik custom-made heels, and with the stunning backdrop of the Pacific Ocean, she looked just like a princess in a fairy tale wedding. Brad looked like Prince Charming in his black tuxedo by Heidi Slimane and his groomsmen looked handsome in Prada. Some famous names that made the guest list include Courteney Cox who was on friends with Jennifer as Monica Geller and Ed Norton who worked on Fight Club with Brad. They still had some hiccups including Brad’s best man dropping the rings during the ceremony but after the emotional vows they had written for each other it didn’t matter. All the Friends fans out there were sad to hear that Matt LeBlanc who plays Joey in friends was unable to make the ceremony. 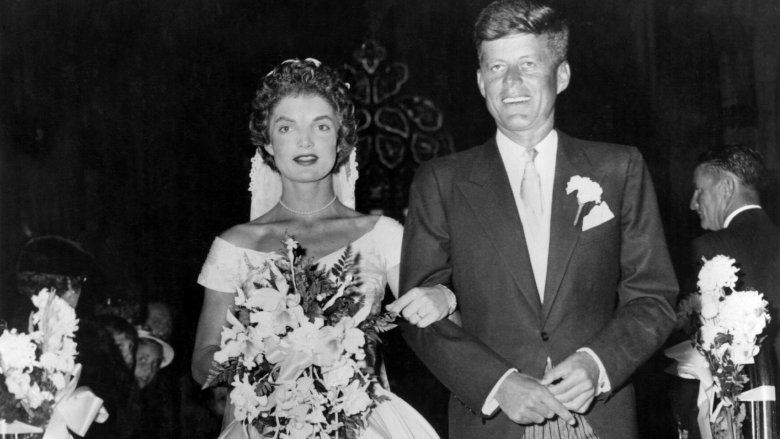 John F. Kennedy was President of the United States and is still remembered very fondly by the people of America. Whilst he was President he was widely loved and achieved so much including establishing the Peace Corps, continuing the Apollo space program, and was a strong supporter of the civil rights movement. He was unfortunately assassinated in Dallas in November 1963. Jacqueline Bouvier was First Lady of the United States whilst her husband held the office of President and she was widely regarded as a fashion icon.

They were married in September 1953 in a Roman Catholic Church in Newport, Rhode Island, around 800 people attended and their good friend Archbishop Cushing performed the ceremony. The reception was beautiful, held on a terrace with a stunning ocean view, another 400 of their friends and family joined them for the celebrations here. Jacqueline wore a spectacular wedding dress with a portrait neckline designed by the African-American designer Ann Lowe. They shared a romantic first dance surrounded by all the people they loved, their wedding was a dream come true.